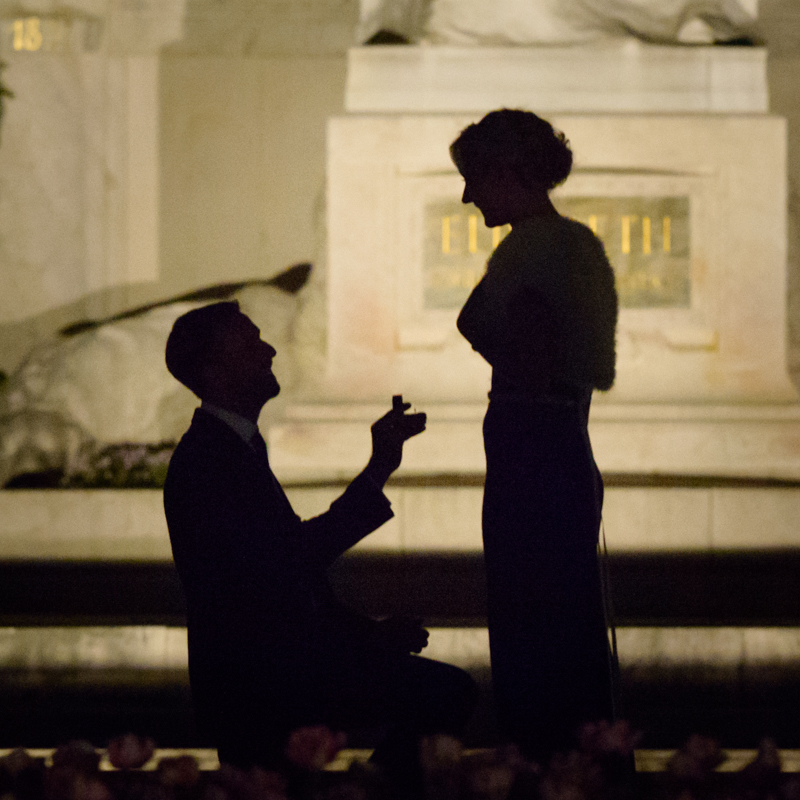 Nathan is a romantic, a serious romantic. Lizzy is his long-time girlfriend and they were visiting Vienna for a few days.

Most people would never even think of renting out one of the prettiest parks in Vienna, but that did not stop Nathan. After a lot of organising, he was allowed private access to the park that closes at 10pm and I was there waiting for him with my camera and my girlfriend who is also a photographer.

I am always a little terrified of taking photos of proposals – you try to be as inconspicuous as possible and not give the game away. At the same time, you have to capture the moment which can be over in seconds so you have to be ready with your camera.

This time, I was waiting in pitch black in the middle of some lawn with my 200mm f/2 setup on a tripod ready to take pictures of the couple in front of the statue. I was standing with my girlfriend trying not to like photographers. We were waiting about 15 minutes in the darkness before my girlfriend saw them walking along the path. As soon as they passed, my girlfriend sneaked up the path behind them with my second camera to get some shots from a different angle.

It was a good thing my girlfriend was there, because Nathan decided to stop in an unexpected spot with very little light. With no time to move, all I could do was take some silhouette photos of the proposal – which luckily enough turned out very well. My girlfriend had a bit more light from her angle and was able to take some fabulous shots from the side (also shown here).

Even though it was such a romantic moment, it seemed like Lizzy had no idea that Nathan would propose. She was very surprised when he got onto his knee but immediately said yes. Once the ring was on her finger and they had kissed, Lizzy noticed my girlfriend taking photos and we came out of the darkness and introduced ourselves. I took over both cameras and started taking more photos while my girlfriend opened and poured the champagne we had brought along.

Nathan and Lizzy were so nice and insisted we drink with them. As we only had 2 glasses, after a few photos, they gave the glasses to us and then shared the bottle between them. We walked around for a bit talking, taking some photos, and enjoying the beautiful park before they left in their waiting limousine.

We use cookies to ensure that we give you the best experience on our website. If you continue to use this site we will assume that you agree to this.Ok